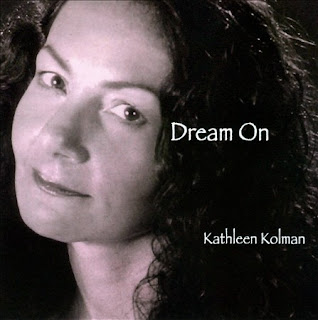 Singers? Sometimes many are chosen; few are called. The jazz world teams with new singers, hopeful, some very talented, some not as talented. Kathleen Kolman belongs to the first category. Her new album Dream On (Walkin' Foot) shows that. This album was her final project for her Masters in Music Education. That's interesting, but the music speaks for itself, as does her vocal style.

The album is a mix of standards, Brazilian classic bossa-sambas, an original and a version of Aerosmith's "Dream On." My youthful musical memories include a time when the jazz-rock interface was just beginning to come into being. Jazz vocalists--and even more so the middle-of-the-road offshoots of jazz vocalists--began trying to bring the rock-pop music of the day into their repertoire. Take even the best. Ella Fitzgerald was a master, of course, but she perhaps was not all that comfortable taking on a Beatles song. Others of lesser talent tried as well but there was a chasm between the vocal styles at that point. Generations came up who had been raised in a world where rock was ever-present. So we come to today and the idea of a singer like Ms. Kolman doing the Aerosmith perennial is not such a leap anymore. And she does a convincing job of it.

And it's not just that she comes out of a different world. She gets interesting arrangements going and sings in convincing ways no matter what kind of song she tackles. Things like Ivan Lin's samba "Somos Todos Iguais Nesta Noite" are perhaps her most convincing numbers. They drive with the lovely lilt that Ms. Kolman handles perfectly. But she has the extended phrasing nuances, the flexible voice color and the pitch control to hold her own on even something as weathered and storm-tossed as "The More I See You." Her original "Until the Very End" is memorable as well.

It's an album with real charm, nice arrangements and a vocalist seemingly with a deep commitment to her repertoire. Kathleen Kolman brings her effective interpretive talents to realize words and music in creative ways, ways that ring true.

I hope we hear more from her soon!
Posted by Grego Applegate Edwards at 3:52 AM