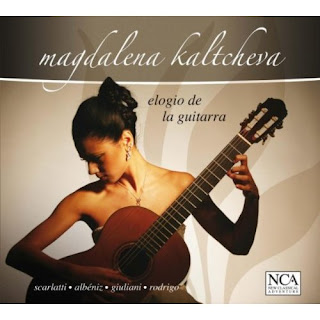 Young Magdalena Kaltcheva greets us with what I believe is her first recording this morning, Elogio de la Guitarra (NCA New Classical Adventure 60219). She is only 24 but sounds rather astonishingly mature on her instrument. From her beginnings in Bulgaria through to studies over Europe, gradually she has captured the attention of the classical guitar world and seems poised on the edge of a long and fruitful career.

It is the quality of her playing on the Elogio CD that convinces me of this. For the recital she has chosen a cross-section of solo works covering the 18th through 20th centuries. The centerpiece surely is the Joaquin Rodrigo work that forms the title of this album. It is, not surprisingly, a work of great charm and idiomatic Spanish guitar writing. Then there are short representative works by Isaac Albeniz, Dominico Scarlatti and the lesser-known Mauro Giuliani.

Ms. Kaltcheva tackles it all with an assured projective presence, beautiful tone and touch, and marvelous phrasing. If as the old saw has it, you get to Carnegie Hall by practice, you also get there by the talent you possess. Magdalena Kaltcheva shows ample evidence of both hard work and superb artistry. And when she gets to Carnegie Hall I hope to be there as part of an appreciative audience.

In the meantime we have this auspicious, sophisticated and artful recital, which should do much to make believers of us all.
Posted by Grego Applegate Edwards at 3:56 AM