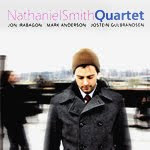 Nathaniel Smith, MUSICAL drummer. That's what I know from his recent debut as a leader of a fine quartet on a CD simply titled Nathaniel Smith Quartet (Fresh Sound New Talent 371). He is also thoroughly schooled in the modern jazz drumming tradition. He swings lightly but accentually; he shows a good feel for brushwork; he gets around his set to provide a lot of good sounds. His skills as a tunesmith are also first rate. Five of the seven pieces on the album are his. They provide distinctive feels, good lines, and very conducive frameworks for the improvisations they set up.

Nathaniel also shows himself a bandleader who can handpick a few choice colleagues to develop a group chemistry that goes well beyond the considerable individual skills involved. Jostein Gulbrandsen is a fine guitarist. His subtle comping and incisive solo style gives the band a personality that it would not have without him. He also writes two numbers for the set, both of interest. Bassist Mark Anderson is another good choice. He underscores the rhythmic-harmonic structures of the pieces with good sense, fine tone and rock solid swingtime. Then there is Jon Irabagon and his tenor. He most certainly is one of the important new voices on his instrument, as a member of Mostly Other People Do the Killing and as a leader in his own right on a number of impressive albums. He can be incredibly exhuberant and boisterous, but on this quartet date he harnesses the dynamo for a group give and take. It's another side of Jon you hear on this one, just a shade cooler but quite lucid, never at a loss for ideas.

So there you have it. The sum of all these parts is a very thoughtfully swinging modern session. Gulbrandsen's guitar solos stand out as exceptionally interesting and we get to see another side of Jon Irabagon. This is serious jazz from start to finish. No frills, no bull. It's one of the best of the loosely straightforward improvisational sessions I've heard so far this year.

Congrats to Nathaniel Smith and his bandmates on this one!
Posted by Grego Applegate Edwards at 3:46 AM