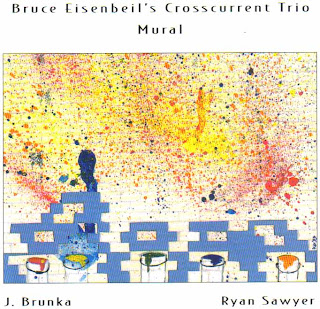 When you think about it, compared to piano or tenor sax, there aren't all that many electric guitarists who play in the free improvisation zone. Not as many. This blog has covered most of them at one point or another. Not Bruce Eisenbeil. Until today. There's a very representative CD that's been out for a few years, Eisenbeil's Crosscurrent Trio and the album Mural (CIMP 194).

It's Bruce playing electric guitar (a Strat) in a trio with fellow travelers J. Brunka on contrabass and Ryan Sawyer, drums. It's a longish program of improvisations that have compositional frameworks by Eisenbeil. Brunka and Sawyer freely accompany what are pretty much guitar-centered performances.

Eisenbeil is less abstract and angular than Derek Bailey, less torrential than Joe Morris, less blisteringly dense (most of the time) than early Sonny Sharrock. Instead he combines chromatic and sometimes slightly diatonic lines with harmonically sophisticated chord sequencing (sometimes played with a rapid seres of strums) in a way that is linear yet not symmetrical. He plays with a fair amount of lower-end settings some of the time so that in those moments the sound is not bright. He also tends to play quietly on some numbers so that he sometimes ends up fairly low in the mix compared to bass and drums. Once your ears become accustomed to his sound, there is much inventive guitar work to be heard on this album.

This is not mellow music; nor is it particularly abrasive. What it is has such a singular thrust that you must listen attentively to get on its wavelength. Brunka and Sawyer are very open ended and sympathetic in helping to realize Bruce Eisenbeil's vision.

In the end what you get is not quite like anything else. Here is a guitarist that most definitely plays himself. Listen and you'll hear something different. Click the CIMP Records link for more information.
Posted by Grego Applegate Edwards at 3:48 AM