Many Arms: Power Trio on Steroids and Ten Pots of Espresso? 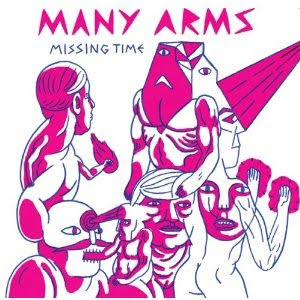 Many Arms? And some legs too. Many Arms uses six arms and at least two legs to create a blazing avant scronk super-progressive speed metal (without the exorcist element) that's powerful and intricate. It's the guitar-bass-drums power trio configuration laying down a 43 minute onslaught of thrash and energy avant on their CD Missing Time (Engine 2010).

Many Arms to be more specific is Nick Millevoi on guitars, John Deblase, bass, and Ricardo Lagomasino on drums. They start in a mode that suggests the psychedelic pre-Mahavishnu McLaughlin and take off from there on a series of noteful, synchronized, chromatic rug burns of speed, stop-start routines and bracingly expressive line twisting. It's music that generally gets set to high and stays there much of the time. Something fast, frenetic, expressionist and very electric is what to expect. Unlike some of their more staid and arena-heat-seeking brethren, they often imply a time or even go beyond time and dispense with the regimentation of rock beats, back beats or even machine-gun double bass drum tatoos. Nick's guitar work is chromatically charged metal that opens up to more advanced harmonic-melodic implications of metal chromaticism--and in that way early Rypdal comes to mind as (again) early McLaughlin. The sound is quite raw, overamped and jagged like broken glass. So there is identity there. Bass and drums do a great job working out the edgy routines and in-the-face pies of free energy.

Many Arms may not appeal to those who seek some "easy" music to hear. This isn't. It's exhilarating, outside and unrelentingly uncompromising. It does what it does (or rather THEY do) with confidence and conviction. At least that's what comes across to me. The late Captain Beefheart would have appreciated this, though they enter his particular realm only obliquely.

Gol damn, though, this is some hot shoot. Get it, turn it up, amaze your neighbors, get evicted. All with a smile on your face.
Posted by Grego Applegate Edwards at 4:01 AM