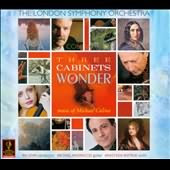 Cuban-American composer Michael Colina might be termed a "natural." He does not teach; he is not a performer; he comes to classical composition after writing music and producing musical dates in the jazz field, all that for 25 years. It is only in the past ten years that he has seriously turned his attention to classical works. And yet when one listens to the London Symphony Orchestra perform Three Cabinets of Wonder (Fleur de Son Classics 57999) one would think one has stumbled on a forgotten master of the first half of the 20th century. The music has full maturity and a way with the orchestra that belies the fact that these are some of his first works devoted to the medium. True, he has scored music for off-Broadway shows, commercials and television, and during the process he obviously picked up much practical experience writing for various instrumental combinations. But that does not explain the stylistic polish and the excellent orchestrational craftsmanship that finds its way into his scores. It's very idiomatic. For example the Three Cabinets of Wonder Violin Concerto is an expressive gem. It reminds me of similar works by Khachaturian, Stravinsky and Prokofiev, interestingly enough. And I might say it does not play second fiddle to such works, in terms of its immediacy and lyrical mystery. The violin part is played ravishingly by Anastasia Khitruk.

The following work, Goyescana: Concerto for Guitar, is no less masterful. Based on traditional dance forms, it is written beautifully and features classical guitarist Michael Adriaccio, who evokes all the Latin-American expressiveness the solo part contains. The orchestral parts have a transparency and atmospheric plaintiveness that sets off the solo part perfectly. If Rodrigo comes to mind, it is because the work comes out of that lineage.

Both of these works are brilliantly conceived and excellently performed. They should make a strong bid for incorporation in the standard repertoire of orchestras out there because they have post-romantic, neo-impressionist appeal.

The third work, Los Caprichos, is a suite of eleven short contrasting movements, once again with a strong Latin-American influence. The music delights. Colina again shows a masterful sense of orchestrational poetics.

Michael Colina gives us compositional brilliance on this release. The London Symphony Orchestra under Ira Levin realizes the nuances of each work with clarity and passion, and the soloists do a wonderful job.

Mr. Colina has arrived. This release has much to offer. Those who seek a new voice that does not eschew tradition will find one here. Classical guitar concerto and violin concerto buffs will revel in these new works.
Posted by Grego Applegate Edwards at 3:53 AM