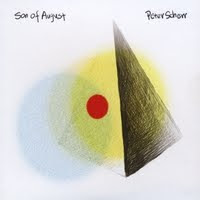 Not familiar with Peter Scherr? That may be because he lives in Hong Kong. (But if you are reading this in Hong Kong, you may know of him?) He is an acoustic and electric bassist who writes some nice material. He assembled a sextet in 2008 to record Son of August. This year it enjoys its official global release (1 Hr Music 013).

Turns out this album is quite listenable. It's an electric jazz-rock excursion with good weighty playing from Michael Blake (who was a Lounge Lizard in the '90s) on tenor and soprano, the twin electric guitars of Brad Shepik and Tony Scherr, and Mike Sarin on drums.

Blake, Shepik and Tony S. do some effective soloing. Michael is bluesy and beyond, and the two guitarists shred, hammer and finesse with taste and good tone. The rhythm section keeps things close to the vest in an attractively loose way, then takes it out towards the end. Leader Peter contributes some not uninteresting solos here and there as well.

The compositions make this a distinctive date. Tempos are generally in the slower rock mode (but not everything) and set up appropriately the anthemic melodies and well-conceived chord changes for each piece.

In terms of overall thrust and a balance between piece and improvisation, this has affinities with middle-period Gary Burton. It does not sound like that however. After a few hearings I felt that the disk stood out sufficiently to be ranked among the best recent rock-oriented jazz of its kind. Good solos, interesting pieces, smart arrangements. A most pleasant surprise! Recommended.
Posted by Grego Applegate Edwards at 3:49 AM