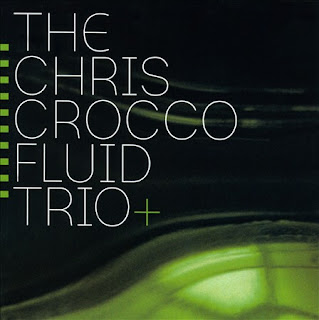 Chris Crocco manages to put forward a formidable contemporary post-bop guitar approach that does not sound like anyone else's in any obvious way. That so many have been influenced is common; that someone potentially could be an influence is most definitely not. His tone is pure more than mellow, as it dispenses with the heavy neck-pickup saturation favored traditionally by many mainstreamers, and his line work is well conceived and flowing.

Crocco's Fluid Trio made an album several years ago that I am sorry to have missed. It had the initial trio lineup of Boston tenor titan George Garzone and Francisco Mela on the drums, the latter a Cuban expatriate who has been deservedly getting some attention out there and currently is a member of McCoy Tyner's outfit. The "plus" in the new edition of the Fluid gathering is bassist Peter Slavov, who adeptly brings the time and bottom anchorage to the band's excursions so that they can swing harder and imply more direct harmonic movement, and they take advantage.

So there you have some of foundation knowledge on Chris's latest release, simply titled The Chris Crocco Fluid Trio+ (CPA Records). It's an all-Crocco-originals date, ten of them to be precise, and that turns out to be a very good thing because he writes some engaging and varied vehicles for the band. Everyone gets solo time and it is time well spent; there's a very good mix of feels and swinging grooves. It is Chris Crocco himself that is pivotal to this date however. The group chemistry is palpably present at all points, but Mr. Crocco's sophisticated, sharply biting yet fully linear guitarwork captures and captivates thoughout most of all.

A fine effort . I hope there will be many more from them in the years ahead.
Posted by Grego Applegate Edwards at 3:58 AM