Gilad Atzmon and the Orient House Ensemble, "The Tide Has Changed" 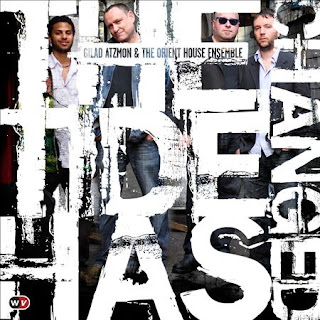 Gilad Atzmon and the Orient House Ensemble celebrate ten years together as a group. Where was I? I missed them. That's too bad for me because their new CD The Tide Has Changed (World Village 450015) has an aura about it, a patina that might take ten years to develop, and I would have liked to have heard how they got that way.

It's a kind of ECM meets the mid-east/Baltic sound they get. Gilad Atzmon plays alto, soprano and clarinet in a way that sometimes suggests a Jan Garbarek influence, but also incorporates the reed timbre and attack of Klezmer, Semitic and eastern European approaches. He has fluidity when he wants to and he also has a ravishing tone. Yaron Stavi plays a very together bass with bow and pizzicato. Frank Harrison puts forward a well-considered piano style that has contemporiety and a good sense of harmonic voicings. Eddie Hick drums with the tone control of a Connie Kay, with swinging fire as needed. That's the lineup.

The highlight is their adaptation of Ravel's "Bolero," "Bolero at Sunrise," which like the original builds nicely but (unlike the original) with a post-Coltrane sensibility. There are beautiful solos by Atzmon on soprano and Harrison's piano (with a little accordion doubling).

You'll find some very nice ballads, some world-influenced numbers, some numbers that play with the atmosphere, and some rapid fire dance-influenced dance-folk pieces (one in a rapid five), all transformed to "House" style.

This is music that has a jazz pedigree yet also expresses the musical sounds and approaches of the world beyond. It is very well done, not what you'd expect, whatever you'd expect. It's so finely done and smartly conceived that after a few listens to get on its wave-length you are captured. I was. Kudos!
Posted by Grego Applegate Edwards at 3:51 AM