Another Goodie From Wadada Leo Smith and Henry Kaiser's Yo Miles: Lightning 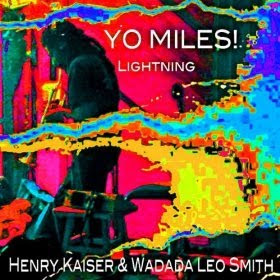 Today a quick look at the second recent reissue/newbie from Wadada Leo Smith & Henry Kaiser's Yo Miles! It's called Lightning (There Records) and you can get it for a good price at your favorite (legitimate) downloadery. It's a good hour of music with interesting tracks that were originally on the albums Upriver: Thunder and Lightning, Macero, and Sky Garden. Three cuts have not been previously released. One in particular, "Tsapiky Freelimo," has good contributions from the Rova Quartet. The band builds on the Miles electric sounds with jams outside of the usual riffs and heads that Miles and his various bands set down. So it is music in the spirit of this part of the illustrious Davis canon.

As I said a while back in my coverage of the companion album Shinjuku, this was & is the premier electric-Miles-influenced band. More than a tribute outfit, they expand on the free-rock-funk premises and make an original contribution. Wadada and Henry are in good form and the rhythm team gives it all the smoke.
Posted by Grego Applegate Edwards at 4:56 AM