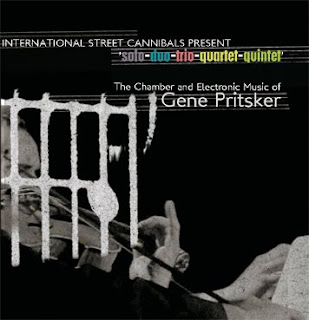 Composer, guitarist, musical iconoclast. Gene Pritsker has one constant about him. No two. First he cannot be pegged. Modern concert music, classical-style classical, rock, hip hop. . . he can and will go wherever the spirit moves within a work and in his overall oeuvre. The second is that whatever he does, he does it with distinction.

The newest recording devoted to his works is the second such volume in the Composer's Concordance series, namely The International Street Cannibals Present. . . the Chamber and Electronic works of Gene Pritsker (Composers Concordance Records). It covers much ground, from the somewhat conventional piece for string quartet, "Credit System of Truth", to a chamber work combining bass clarinet, cello and electric guitar ("Poem #1"), to purely electronic/electro-acoustic music ("inside"). (See my other blogsite at www.gapplegatemusicreview.blogspot.com for a review of the first volume. See this site for additional coverage of various other Pritsker releases.)

Some of this music has a kind of 20th century expressionist sound to it and/or a sort of New Americana point of view. The electronic pieces are the more unconventional, using a variety of sampled and electronic sounds to create a vibrant mini-universe.

In sum the Chamber and Electronic Music goes in a number of different directions. But it ultimately succeeds in giving the listener a well-performed cross-section of the composer's work in the smaller ensemble mode, and a tantalizing glimpse of the purely electronic side of the Pritsker opus. Those unfamiliar with Gene's music might do better to start with the first volume of the series (which covers several of his works and those of other new composers) or his Innova recording of "The Varieties of Religious Experience Suite." Those who know Gene P's music will not be disappointed in this one. Nor will those who favor the chamber mode of expression, I would think.
Posted by Grego Applegate Edwards at 4:28 AM