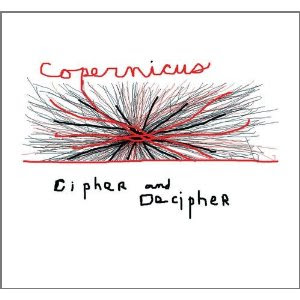 Copernicus gives you a new chapter of subatomic rants with Cipher and Decipher (Nevermore/Moonjune 2092). As with his earlier outings there is a sort of psych-prog-fusionesque jamband backing him up. Their job is not to intrude with much in the way of soloing but to give the prose-poem rant a context, and this they do well.

Copernicus starts where Jim Morrison's "The End" leaves off. Instead of "Mother, I want to. . . aaaargh," Copernicus gives out with his vision of a universe forever changed for humans with the discovery of subatomic particles. All bets are off. We don't exist. None of our handiwork, for better or worse, exists. The message is brought to you with a great deal of hubris, such that Copernicus sounds a bit like a madman.

It is not without its interest. Most will not find the need for a complete set of Copernicus rants. And so perhaps you are better off starting with one of the earlier disks, for a foundational rant. Listening to this one first is a little like starting a novel in the middle. Those who are Copernicus adherents will neither be surprised nor will they be disappointed with this new one, I suspect. The rest of us? Festivus!
Posted by Grego Applegate Edwards at 4:35 AM