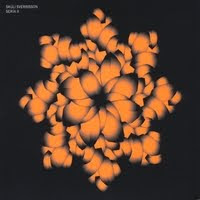 His last album was Icelandic Album of the Year. But Skuli Sverrisson, bassist, composer, arranger, producer, has more than a local cache. His follow-up, Seria II (Seria Music) plays on my computer as I write. And I am trying to get a handle on a description of what I am hearing.

[But first a little rant. Some designers think that type is that annoying crap that messes up the design. And I guess because it is supposed to be hip too, type on CDs has become so small as to be pretty much illegible. I have a magnifying glass in my office now so I can try and read what is what. This album is one of many such. The name of the artist and the name of the album on the front cover are nigh close to unreadable. Point size? Maybe five points. In knock-out-to-white type, and all-capitals, no less. This violates just about every rule of thumb designers were taught when I was apprenticed some time ago. It's true size-wise of the inside copy too, but at least there it is upper and lower case, black type on white. What happened to the idea that if you want someone to buy something, you allow them to know what the name of the artist and title of the album are, in legible type? The watchword for many years has been, "Oh, people won't read it anyway" in many such instances. Well I beg to differ. I do wish that some sanity is restored to graphic arts, before I become blind. Words have a function--and I fear album sales are effected when you can't read the words for their meaning. And God forbid there should actually be some sentences on the music! OK, enough of that.]

Back to a description of the music. This is mid-sized chamber music. Not classical exactly. Not exactly new age. Acoustic guitar picking often forms the foundation for the layering of instruments and wordless (sometimes synthesized?) voices. The music has a good deal of ambiance, but also a pulse. The melody ambles on in an attractive flow, without typically repetitious minimalism, but in long strands that have sequencing and mesmeric rhythmic sameness. There is a northern folkishness to the sound and some very interesting instrumental-vocal combinations.

It's music that might well appeal to those who seek new-age-ian repose or semi-trance states of conciousness. Eno? Not really. It almost has an easy-listening-in-space feel to it, but it is too new sounding, too utterly distinctive, to use a phrase that could be conceived as deprecatory.

Entrancing. Music. New. Easy. Contentful. Bright and burnished sound color. It's very interesting indeed. File under "whatever" or "new things that do not yet have an appelation."
Posted by Grego Applegate Edwards at 5:15 AM