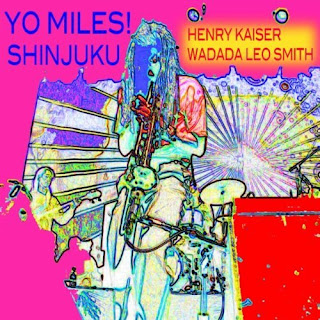 Of all the electric Miles Davis tribute outfits, Henry Kaiser and Wadada Leo Smith's Yo Miles went the furthest in taking the innovative (and in some avenues still controversial) style of Miles' principal electric period (1969-1975) and growing it with the implications of how those bands made music.

The recently issued, download-only album Shinjutsu makes for a great example of this. Working around the nucleus of Henry's guitar and Wadada's trumpet, the band builds their own edifice of psychedelic rock-funk and sound color that both remains true to the many aspects of Miles' music as it takes them further along in ways that allow the soloists to bring their own personal takes on the Milesian mode and gives the collective band a chance to create additional colors and group presence.

Four tracks were previously issued on Sky Garden and Up River and there is one weighty unreleased track, "Muhammad Ali (Live)", which is especially notable for the interaction of Wadada Leo Smith and tabla master Zakir Hussein.

Most readers will be aware of the reaction against this music, well organized and consistently put forward by certain famous and infamous individuals. They claimed that the style was illegitimate, against jazz, and ultimately uninfluential. I believe strongly that that is not the case. Shinjuku shows as well as any the lasting legacy, the continued vibrancy, and the open plasticity of Miles' concept. It brought--and continues to bring--the music into the contemporary world we live in. Of course there have been other stylistic trends that have done that and continue to do that as well. In order to benchmark the importance of what Miles accomplished in light of later developments, one cannot look entirely at the acoustic jazz groups that have operated in its wake. For color, for rhythm, for freedom within a set of form parameters, the influence is everywhere you find electric bands working in the long form. And you find it too in acoustic bands looking for a way around head melodies, changes, straight modal, and hard-bop group routinings, as well as in free-playing groups seeking to find additional ways to extend improvisational form.

All in all Shinjuku is a great example of Yo Miles in its evolved stage, an entity unto itself. And at the same time it's an example of what Miles's electric legacy has given us.

Much recommended. Find out more details and download the album at the usual download hot spots: i tunes, Amazon, etc.
Posted by Grego Applegate Edwards at 4:39 AM