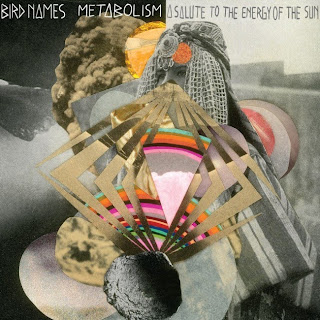 OK, we have a group called Bird Names on tap today. They did an album in their basement (Chicago) which they call Metabolism: A Salute to the Energy of the Sun (Northern-Spy). It has a strange sort of garage momentum combined with an element that is so original I don't quite know how to describe it. The Northern-Spy website mentions the Residents, and there is a wall-to-wall conceptualism here that I suppose has some Resident qualities. There is a hint of classic Beefheart and psychedelia, but then it goes off on its own so you might just forget all that and approach the music on its own turf.

There is a DIY ingenuity at play though. They have a low-fi kind of authenticity and an asymmetrical kind of alt going on. It's absolutely underground sounding in the classic sense. The vocals are garagy, they use the usual rock instruments plus extra percussive and home-grown sounds.

It's fun and rather deranged. I have trouble easily assimilating where they are coming from. Which is a very good thing. This is recommended for those searching for another way to do things. They are original and perhaps a bit nuts. That is quite cool with me.
Posted by Grego Applegate Edwards at 4:25 AM