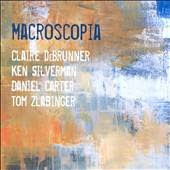 Despite the words of a song that blazed over my radio as a youth, freedom is NOT a word for "nothing left to lose." Freedom of choice is almost a terrifying prospect, as you know if you've looked with glazed eyes at the 200-odd brands and sub-brands of spaghetti sauce in the pasta aisle of your supermarket. Sometimes you stop caring that there is freedom of choice, partially because it becomes meaningless. It's a free market thing undoubtedly, to have huge price differences, little variation in actual features, and maximum sensuous overload from the images and graphics of what's on the outside of the jar. We all know the feeling, I suspect. That's not the kind of freedom that free improvisation represents. Freedom, at least here, brings challenge and responsibility. It's serious. All the creativity, all the imaginative and technical resources of each musician comes into play. One's reputation is on the line with every passing minute. The quartet of free players on the CD Macroscopia (Metier Jazz 0403) take that seriously. Listen and you know it is so.

A drummerless quartet of bassoon (Claire deBrunner), electric guitar (Ken Silverman), reeds and trumpet (Daniel Carter), and contrabass (Tom Zlabinger) forms the nucleus of the music. Seven free episodes comprise the CD. The quartet creates spontaneous four-way melodic communications of a modern sort. The tonality tends to be expanded and the emphasis is on invention as a whole. There aren't so much solos as there are collective improvisations. This is music without the safety net of preplanned compositional frameworks, overarching rhythmic patterns or, for that matter, without a lot of energy forays.

Claire deBrunner's bassoon gives the ensemble a distinct sound from the beginning. Bassoons do that! She plays a good bit of it and fits well with what the others are doing. Ken Silverman's guitar work has subtlety and a certain amount of selflessness. He creates lines and some harmonic context with taste and restraint. Daniel Carter loosely responds to the others in ways for which he is known. Tom Zlabinger anchors the proceedings with lower register contributions that, like the others, keep the group context as its focus.

What you get in the end is a promising quartet playing a challenging set of group improvisations which move directionally. Continued future interactions could well mark them off as a free ensemble of importance. For now there is a tentativeness in the explorations, a sounding-out of some possibilities, a testing of the waters. That doesn't mean that this is not an interesting listen. It most certainly is. I wish them the best and hope they continue to blossom as a unit as they continue their journey into uncharted territory.
Posted by Grego Applegate Edwards at 5:02 AM