Guitarist Bruce Arnold and The Art of the Blues 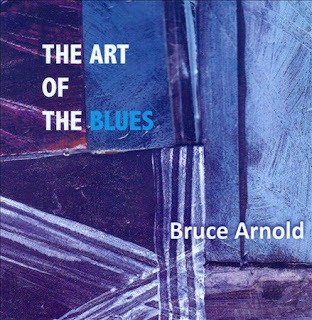 Bruce Arnold does not operate in one dimension. He slides through various musical zones with facility and imagination. For example his duet recording with Ursel Schlicht (reviewed a little while ago on these pages) operates on a high level in a free zone. Today's CD, The Art of the Blues (Muse Eek 157), addresses some of the roots of today's music, namely of course the blues, in a trio setting.

Mr. Arnold's blues do not sound like Robert Johnson's. Bruce applies harmonic, rhythmic and melodic ideas to the blues form to get something that extends that form into areas that sound quite modern, without losing the basic essence of the classic earlier forms associated with the plugged-in electric players of the mid-20th century.

The trio of Arnold, Dean Johnson, bass, and Tony Moreno, drums, has a forward-moving linear approach yet expands and augments the basic pulse in ways that put a spin on asymmetrical odd-meter time feels while maintaining a swing-pulse groove. The harmonic-melodic extensions in which the group operates also make this a most distinctive set of music. This is blues on a plane of its own.

But if it were only that it would not be as interesting and satisfying as it is. It's the musicianship of the trio that convinces. The main impetus is Bruce Arnold's lucid and consistent application of his ideas to the solo craft. It works too because Johnson and Moreno are totally onboard with what is going on.

If you are willing to take the time to listen closely and repeatedly to this music, it will reward you with some fine sounds. Arnold does something very worthwhile here. From the level of guitar art and ensemble chemistry, this one has it! Recommended.
Posted by Grego Applegate Edwards at 5:16 AM