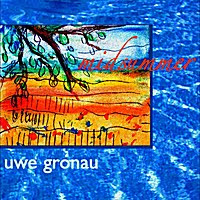 The borders between genres have never been absolute. There are periods where they may seem more so than others. Now is not one of those times. There has been over the years the development of a certain overall musical sonance that has come about only gradually, starting in the realm of "pure" electronic music from the '50s on, then as a part of the electric jazz of such pioneers as Miles Davis and Herbie Hancock, cropping up in the music of the classical prog rockers such as Yes and King Crimson, the jazz associated with the ECM label and, ultimately, as a part of the music known as "new age". We now also have something called soundscapes which shares with these other musical forms a kind of cosmic ambiance. As time has gone its way there have been various convergences between any and all of these sound-development side-pockets, for better or worse.

Uwe Gronau exemplifies that convergence in his two-CD offering Midsummer (Doppel-CD). Gronau does all the keyboard playing, composes the music, and conceptualizes the sound. He is joined by a few key sidemen here and there. This is not a music that is about soloing or virtuosity. It has a great deal of the ambiance alluded to above. It often straddles the edge between new age and soundscape (with flirtations into prog rock territory), and it does it with such a consistently good musicality that one does not shrink away from the connotations certain labels may entail. (I mean new age.)

The instrumentation varies from ambient solo piano, synth-based space music, slightly more edgy things (and I mean slightly) with guitars, bass and drums, and so forth. It is largely instrumental (one song has vocals) and it is designed to be easy on the ears.

This is music I could dismiss easily (and I have done that in my mind with similar examples). What kept it on my "to review" pile is the musical substance the album contains. It has a tunefulness that is not just simple pablumatic pleasantry. There is a musical mind at work here. Plus the arrangements have interest. The sound of the production has a vibrancy.

So if you are going to listen to this sort of thing, what sort of thing I hope I have described adequately, I do reccommend you check this one out. It is perhaps rare to find an artist that can create an "easy" sort of music without stepping into a miasma of pap. Gronau sidesteps the pap-holes and gives the music a bit of grit when needed.

Oh, I forgot to mention that this music is an expression of aspects of Wittgenstein's philosophy of language. I like that.
Posted by Grego Applegate Edwards at 5:13 AM