Sanda Gets Back to the Roots with "Gypsy in A Tree" 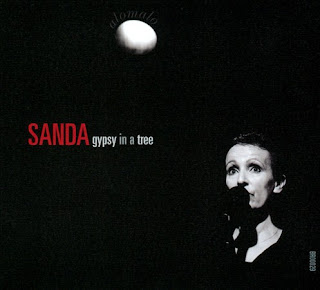 When we refer to something as "World Music," what we mean in some sense is "rest-of-the-world" music, music that is not precisely part of our world in the local sense. Otherwise of course all music is "World Music," unless we start getting radio signals from some would-be Hendrix of Alpha Centuri. Since we only have found a few amoeba sorts of things on meteors and such, we do have a wait, I suspect. And while "World Music" has a kind of almost post-colonialist ring to it, I guess it will have to serve for now.

Which brings me to today's music. It is contemporary, downtown-ish arrangements of Romanian Gypsy music by Sanda Weigl, Gypsy In A Tree (Barbes Records BR0029). Sanda has had an interesting journey to where she is today: Eastern European rocker, political prisoner, downtown new music-avant-gypsy figure.... Her new album includes a cast of interesting big-apple based Japanese musicians and assorted others. Sanda's training in the Brecht school of dramatic presentation serves her well in how she sometimes falls into a kind of new-old cabaret style a la Brecht-Weill and Threepenny Opera, which leads me to believe she could be excellent in the cast of one of those classic singspiels. But of course Romanian folk has those dramatic declamatory tendencies too, so it works either way you look at it.

This is a good listen. Sanda sings with the enthusiastic abandon these sorts of songs demand. The arrangements are consistently interesting with hints of everything from klezmer to Weill to Carla Bley to some of the Zorn contingency.

Once you give this one a few listens to sort out what it IS and what it ISN'T, if you are like me, the music takes over and you simply sit back and enjoy. If you like the minor-strained passion with the infectious dance rhythms indigenous to music from this part of the world like I do, you will no doubt find this to your taste. She sings heartily well, the musicians do interesting things and the songs are certainly worth the earful. Oh and by the way, if you are New York-centered, Sanda will be having a release party performance at the 92Y Tribeca one week from today (April 22nd).

Recommended for those of this world. Those Alpha Centurian Hendrix-types will have to take a chance on this one; I can't predict what it is you'll like from our many earth musics.
Posted by Grego Applegate Edwards at 5:04 AM