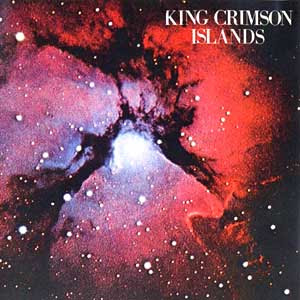 Fripp and Crimson followed the magnificent, window-rattling Lizard with a somewhat quieter, more introspective, often touchingly lyrical Islands (King Crimson KCSP4). The 40th Anniversary CD/DVD set which you can grab now, like the others in the series benchmarks the standard for definitive edition production. Once again the CD provides a remastered two-channel stereo remix of the album and select alternate takes; the DVD brings to your ears a marvelous 5:1 surround mix and a wealth of early mixes, different takes, fascinating early rehearsal run-throughs, live versions and an unreleased track from the sessions.

The realignment of personnel was a factor, though this particular one-off lineup continued the sound and feel of the earlier groups. Mel Collins on reeds was one of the notable presences, as was Boz on bass and post-Lake-ian vocals.

This is an album that deserves more credit than it perhaps has received. The compositions are strong, the lyrics zero in on the idea of how it feels to be isolated, island-bound in a metaphoric as well as a physical sense. You have some mellotronic onslaughts, free-playing within the song form, gentle balladic melancholies, beautiful chamber-orchestrated art song, and some excellent, sometimes subtle Fripp guitarwork.

The sound is great, the extra cuts give you a round picture of the state of the band at the time and in this case it certainly increases my regard for an album that never seemed to stick in my mind. The distinct and consistently distinctive melancholy of Islands marks it off as a singular part of the Crimson opus, ambitious and successful at it without a great deal of fanfare. Hear this edition and you'll probably reconsider what you think of the music. And the new mixes are ravishing.
Posted by Grego Applegate Edwards at 4:45 AM