King Crimson Anniversary Edition of "In the Wake of Poseidon" 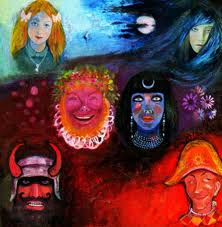 I reviewed the Anniversary Edition of King Crimson's first album on these pages a while back. Today it's time for the second album, In the Wake of Poseidon. Like I found on the new version of the first, this is doubtless the definitive edition of this album and a model for intelligent remastering. You get a CD with a remastering of the album and select alternate song versions, all worth hearing. Then there is a DVD with a stunning 5:1 surround mix of the master takes and a host of alternates. I will not dwell here on the sound quality; it is excellent and a very good reason for grabbing the disks.

The second Crimson confirmed the stylistic importance of the band and their ability to prevail despite periodically shifting member lineups. There are the cuts that remind one of the first album, but there are new advances as well. "Cat Food" put them in a mode (thanks in part to Tippett's skittering piano) where prog rocking incorporated free and avant elements in ways that worked on either side of the balance. "The Devil's Triangle" took a very loose adaptation of Holst's "Mars, the Bringer of War" (from The Planets) and made it into a long and fascinating tone poem for mellotron and virtually all the musical resources Fripp and company had available to them. "Groon," which was the B side of the "Cat Food" single (and not part of the original album, at least in the States) is an avant-rock trio making seriously adventurous music and an opportunity for Robert Fripp to further establish what his guitar style was and could be. The fair number of alternate versions of this number on the DVD shows that they knew what they were after, and each is interesting.

My point is that though it seemed at the time (due to the first side of the original record) that they were repeating the first album in some ways, in fact as is always the case with Fripp's musical vision, they were continually moving forward.

The second album continued what to listeners at the time (myself included) seemed a dramatic development on the British rock scene (and it was). Here was a group that combined a haunting lyricism with an exploratory ethos that, unlike most bands of the era, could pull off the more ambitious elements not just successfully, but with total identity. The Crimson legacy was to achieve art status in the realm of Prog Rock, and to progress from album-to-album into a vast terrain that was charted out and made use of in ways that exemplified what was possible in that realm. It served as a model for other bands to follow, not of course always with the best results.

The point is that In the Wake of Poseidon remains of prime artistic importance today for the rock music of the era; and it is as historically important as any album coming out in rock circa 1970. The fact that the 40th Anniversary Edition is definitive and unlikely to be superseded in the years to come is one more reason why it is a very attractive option for those who were there then or want to understand the development of the music scene as it unfolded in those turbulent days. Take what Hendrix had been doing and what Crimson was just beginning to do and you have the one-two punch of what was advanced about the music and what the future was to bring--again for better or worse.

Have I said enough?
Posted by Grego Applegate Edwards at 3:52 AM