Broken Records' "Let Me Come Home": A Rock Sound Unto Itself 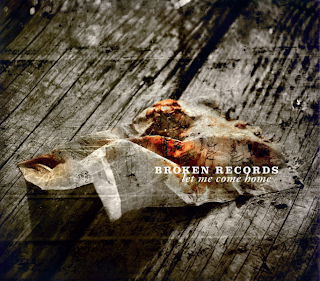 The Edinburgh band Broken Records started with some song ideas by leader-vocalist-guitarist Jamie Sutherland in 2006. A six-man band formed to put those ideas into sound. Their new album Let Me Come Home (4AD) presents the latest and most evolved version of that band sound. It has a flourish, a rather thickly textured wall-of-simultaneity that is more than just guitars-bass- drums. There's a violinist, who when needed becomes a string section in the studio; there is a well-thought-out rock orchestration at work on all the songs.

And the song-centered presentation in turn centers on the dynamic vocals of Jamie Sutherland, who has some of the rangy intensity of the singing of Jeff Buckley, Ours and No Man. Is this some kind of prog rock then? I'd say yes, only for the reason that the sophisticated art-song forms and the grandly conceived instumental carpeting give it something much more elaborated than a garagy slam. On the other hand there is sometimes a kind of Springstein-ish immediacy (without some of his pop sensibility) that is cushioned by the lushly thick, slightly dark wall of instrumentation.

Yet there is a singleness of direction that doesn't necessarily fit that mould.

Suffice to say at this point that Broken Records make some highly distinguished, rather beautiful music that doesn't quite sound like it was made by anybody else.
Posted by Grego Applegate Edwards at 4:50 AM