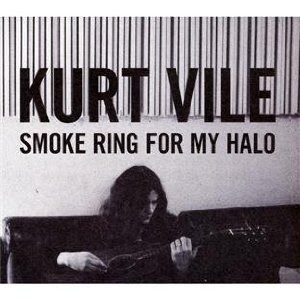 Kurt Vile rings true. Smoke Ring for My Halo (Matador) rings true. Some artist don't as much. What almost indescribable thing makes a fellow with a guitar, backing musicians and a bunch of songs seem effortlessly authentic, while others may toil and labor and come off as trying to be something but not really getting there? It's not a matter of complexity, always. Mr. Vile plays pretty simple chords behind his almost casual delivery. But those chords work together and they aren't cliches. And he can do a little picking and combine simple but unusual patterns that bring out a new wrinkle to what can be done. The vocals lay back and tell of something he feels, something about his situation and maybe ours. They are honest. But they are also not just of the "I want a Clark Bar" sort. The complexity of needs and feelings in the world we're in, the imagery of being beyond despair to another level of seeing, the honesty of classic blues with the steel shattering angst of the petty everyday person-in-world not-of-his-particular-choosing. And he tells you to "take a whiz on the world if it doesn't work." Yeah, I can get with that feeling.

That's a taste of why I think Kurt Vile is true, to himself, to us. He's the opposite of glitter and surface; yet he is kind of saying, I may have depth, but it doesn't seem to change anything that I experience.

That's my take. Kurt Vile on his Smoke Ring for My Halo (the new one) comes through with laconic post-angst that sounds right, lays right, and communicates how perhaps people feel right now. Anyway one never doubts that this is what HE feels. He is anti-matter. He is anti-pop. He is not a product. He might start feeling very happy if you buy his new album. I'm sure that wont ruin the place he's in right now. So do it anyway.
Posted by Grego Applegate Edwards at 4:39 AM