Whoarfrost Kicks Out the Jams in A CD of Avant Skronk 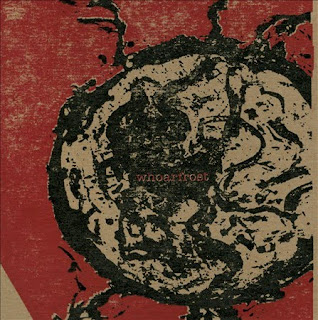 You know when you hear the opening track, "The Young Are Sniffing Waste," that Whoarfrost (Engine 038) is not a typical power trio by all counts. They thrash, they put on a punk attitude, they exude a tremendous amount of energy... all this is true. But there is something else in there. Or rather a series of something else's. Funny little repeating figures that stick out of the mix, some blocks of power chords that aren't the typical ones, and they are hit in a complicated, jagged sort of way by the band. Vocals that aren't just punk-skronk yelling-self-hoarse, though there's a good bit of that. There too are art melodies of some sort. Additive and subtractive rhythmic phrases. Noise jam, post-Hendrix group psychedelia of a sort that shows they have musicianship to spare. I could go on.

It would be just like Steven Walcott, his Engine Records philosophy and his irreverent attitude toward the status quo that when he-they put out avant punk music it sets on its ear the setting-on-its-ear process, setting the setting on its ears.

These three goodfellows, these three "yutes," John Lipscomb (guitar, vocal), Tim Shaw (bass), Ethan Snyder (drums) are onto something and have quite obviously worked hard collectively and individually to get their aura together.

I hand you no bull, these Berklee renegades regroup under their own banner and continue the general onslaught on normalcy that avant garde anything and everything is all about. I hope young folks get a snootful of this music. It might give them the sort of jolt that the Fugs, Mothers, Beefheart and Hendrix did when I was a lad. Beyond age-ism, though, this is a new sort of punk that is no longer punk. It is much too accomplished to hide behind the angry slacker pose--and it doesn't, really.

Yes, boss, this might be one you should search for.
Posted by Grego Applegate Edwards at 4:41 AM