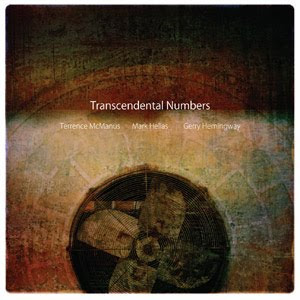 Someone who doesn't listen to avant improvisation of the sort presented on Transcendental Numbers (No Business NBCD 27) might be at a loss to evaluate it. It's a free-flowing series of improvisations from the electric guitar of Terrence McManus, the contrabass of Mark Helias and the drums of Gerry Hemingway. There are a few things that can help you evaluate and understand what you hear.

First, "free" doesn't mean you are entitled to download this gratis. Do that on a pirate site and you'll make this music impossible to produce on every level and it will disappear. Seriously. Second, keep in mind that "free" doesn't mean "play any old shoot," at least in the hands of the accomplished avant improvisers. It means that the players have spent their lives honing their musical abilities so that they bring all they know and can do into the musical session. It means that this trio is free to go in any direction that they see fit. So you get bluesy sounding passages, free commentary of rock-funk forms and earlier jazz without direct engagement or quotation of the licks. It means working within pitch centers (both near and far away from the elemental expression of them). Third, it means directing the musical results toward sound color creation--different ways of playing notes timbre-wise, noise elements, sounds as sound-music. Fourth, "free" music implies a state-of-mind on the part of the players and audience. The moment is the message in some ways. The moment and what the players can do within it. Sixth, a brewing up of tumultuous energy has long been a part of the free avant repertoire. They do that here at times in convincing, moving ways, with McManus sometimes at the same time making a nod to the psychedelic rockers of yesteryear.

Seventh, the players try to develop a feel, phrase, a rhythm or any number of other elements to unify the improvisations. (The alternative is to never repeat anything and that is in part related to the serial composers of the Post-Webern sort, and mind I am not saying that this is a cheap copycatting--it's just a shared trait. It's a akin to the idea that music usually utilizes or implies scales. It's pointless on a certain level to try and pinpoint exactly who first articulated, say, the harmonic minor scale and then go on and accuse everybody else of stealing it.) There is probably an eighth, a ninth, and an x-to-infinity number of points I could make here, but it is 7:24 AM in New Jersey and it's Tuesday, so I'll simply press on.

Judging by these criterea and the others I have not systematically articulated on this lovely seasonal morning, Transcendental Numbers hits the target, so to say. McManus can play well with outside electric sounds in what Barry Altschul used to call a "make a sound, make another sound" methodology. McManus can jump in and out of blues and rock tonalities in a meta-commentary sort of way. He can vary his attack so that some figures have staccato rhythmic emphasis (and set up possible counter-commentary in the trio), or he can go for a-rythmia, and/or for legato or alternate-sounding means of producing tones. He can play some clusters of tones, chord-like, articulated in all sorts of ways. And there is more there to his playing on this recording, too. The point is he remains engaging, interesting and freshly creative throughout. Mark Helias and Gerry Hemingway are well-known as adepts at this sort of improvisation. Suffice to say that they do all the things that we've alluded to above and they do them well.

The trio in fact is dedicated to that "doing it well in the moment," and they succeed fully. McManus is too pomo to stick to pure sound as the late Derek Bailey mostly did; and he is too restlessly creative to remain in the land of tone for long periods. He shows throughout that he is one of the more interestingly inventive out guitarists working today; and the trio comprises some of the very best avant improvisers.

So you should try and support this music by buying the CD. You want to know what frio-trio with guitar is all about, here's a good example. For those who know all that, McManus has his own vision which is apparently in the process of congealing nicely. It's an encouraging recording for the future McManus and quite interesting listening beyond all of that.
Posted by Grego Applegate Edwards at 5:55 AM