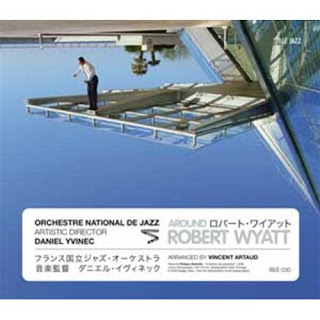 There are artists who are so distinctive, so brilliant, they break through categories and leave you fumbling around for a handle to give readers so they can go away thinking, "oh, it's that." With Robert Wyatt is never just "that." It's that and lots of other things. In the end, it's Robert Wyatt, somebody who, after an adult lifetime of listening to his music, you can best put into focus by saying, "you know, it's what Robert Wyatt does so well."

Since that won't do, something more must be said. So I'll try and say it. So. Start at the beginning. He was the Soft Machine's drummer and vocalist for their first three albums. Those are arguably their most characteristic efforts as a band, though they (the band) of course went on to do somewhat different and wonderful things. Certainly what made those first forays into the music world so interesting was the presence of Robert Wyatt, for starters. Robert the vocalist was and is a unique entity. I wont try to describe that. And his songs began to emerge too on those first few albums. "The Moon in June," from Soft Machine Three was a landmark of through-composed long-song form for "jazz-rock" as it was then known. I won't try to capture the essence here.

Things went their way and Robert left the band, was in an accident that made drumming more-or-less an impossible thing. But Robert continued to develop his vocal-conceptual-song-oriented approach and influenced generations of artists in the way he did all that.

So we come to today's disk, a CD with a second, shorter bonus disk, all devoted to the songs of Robert Wyatt. Around Robert Wyatt (Bee 030) is that. It's a moving around all sides of his complex musical personality to construct a three-dimensional image of his music. Robert is one of the vocalists and the Orchestre National de Jazz (artistic director Daniel Yvinec) takes some very fine arrangements by Vincent Artaud and makes a memorable mini-retrospective of some really wonderful Robert Wyatt songs. The arrangements are non-fomulaic. It's almost of the caliber of what Gil Evan's did for Porgy and Bess. Maybe it IS that, plain and simple. There's a jazz element but this is not big-band Wyatt, it is more what the organization's title implies: orchestral jazz.

Robert Wyatt writes songs where the lyrics and melodic elements are equally unusual. There's a melancholy that pervades some of it, there's a focused drifting quality there too, and there is a long-song form that he so has mastered. These are art songs, songs that you can hear 50 times without plummeting the depth and breadth of them.

Around Robert Wyatt has everything going for it: the beautifully wrought songs, great arrangements played with care and inspiration, and the vocals, not the least the ones by Robert himself. This is far more than one of those tribute sort of deals that are around. It is beautifully made music that stands alone as an important Robert Wyatt album, OK?

I remember one of the reasons I went out and bought Soft Machine's Three (which started it all for me) in 1970 was because Rolling Stone called them "the thinking man's rock band." Well, they were right about that. Robert Wyatt has become the thinking person's songmaster. He's gone on and done other things...things one should not miss. Around Robert Wyatt gives you a brilliant overview of a brilliant music-maker.
Posted by Grego Applegate Edwards at 5:25 AM