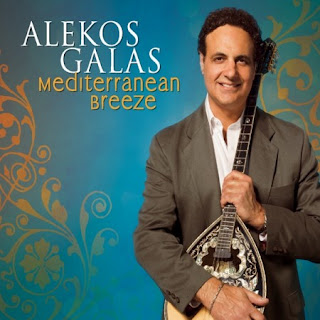 The double-stranded string instrument known as the bouzouki, safe to say, has been a central part of the Greek musical texture for ages. Alekos Galas has taken the virtuoso technical requisites of bouzouki practice, mastered them and elevated his playing to the upper realms of possibility on the instrument.

On his CD Mediterranean Breeze (Ehos 0417) he shows convincingly what can be done when he applies his considerable abilities to a fusionoid-light smooth-funk context. This is pleasant music on the pop-side of the spectrum. He is joined for the date by a fairly large gathering of musicians including Alex Acuna on conga and percussion, and electric bassist Abe Laboriel.

Mediterranean Breeze stands or falls on Alekos Galas himself. Without his considerable presence this would be an innocouous and fairly ordinary gathering of peasantries. Galas makes it more than that. Much of what he plays is on the melodic, pre-planned tune-spinning side of things. His solo improvisations are brief. In that way this is closer to contemporary Greek music than "jazz" per se (though his few cadenza-like passages are pretty impressive).

Nonetheless Mr. Galas is a fine player. I'd love to hear him put a little more (or even a lot more) grit into his concept, but his music in the present form will no doubt find airplay on the smooth jazz radio outlets.
Posted by Grego Applegate Edwards at 5:02 AM