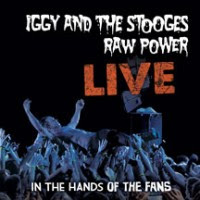 The Stooges were unvarnished and a little bit dangerous sounding to the majority of rock listeners when they hit the stage in the late-sixties, early-seventies. It's a well-known, well-told story of a band that was one of the first to return to the garage in a consistently excellent way. Like the Velvets, they ignored the increasing sophistication that was generally taking over. Unlike the Velvets, though, they took a little longer to reach cult status.

Cut to September of last year, when the reunited Stooges, complete with a very energized Iggy, played the All Tommorrow's Parties Festival in front of rolling "tapes".

What happened that day is well captured on an LP release, Raw Power Live: In the Hands of the Fans (MVD Entertainment). It's a blazingly overbearing (in a good way) performance of what was probably their seminal album (Raw Power, duh).

There's no point in discussing the niceties of this album--because with the Stooges as they should be, there ARE no niceties. It's rude, man, as it should be. And it's most definitely the band totally ON it. No need to say more.
Posted by Grego Applegate Edwards at 4:25 AM