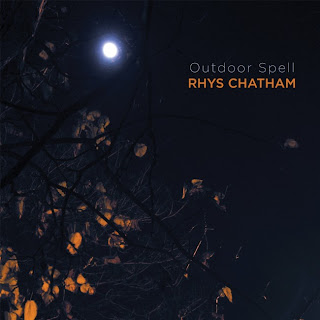 Rhys Chatham may be known to you as a punk artist or guitarist. For his debut Northern Spy release Outdoor Spell (004) you can forget all that for a moment. He's playing the trumpet on this one, and not just one. The CD (or LP or MP3 download) concentrates on a series of four soundscapes for multi-tracked trumpet. The third piece adds cajon percussion; the fourth electric guitar and drums. These are rolling, continuous sound-musical-scapes that present themselves as universes of trumpets, droning, forming chordal tones, playing Lamont Young-like endlessly embellished figures and using unconventional techniques to make percussive noises.

It's post-minimal or maybe just minimal, though at this point the relationship to a Carl Andre sculpture installation seems forced and not even relevant. Because if Carl Andre made physical forms that sounded like Rhys Chatham's work here, it would not have that smooth, ordered regularity. It would be more of a blooming, buzzing artistic chaos. That's not to cast dispersion on Andre or Chatham, just to wonder out loud if this really is minimalism. I suppose it is not. No matter.

The music sometimes sounds like a modern analog to some Sub-Saharan African tribal evening, hundreds of women ululating repeatedly, drums beating a foundational pulse, men singing something somehow related but unrelated-contrasted to the other elements. You may read that sentence and think, WTF? The point is that there is a rich layering, a continuous sound, an aural soundcloud.

The last piece, for guitar, drums and trumpet, has more of a freely conversational feel, more in the way of semi-legato pointilism if you will. (And if you wont, then just think that the phrases of tone or sound interlock and are shorter.)

In the end you feel like something good has happened by the time you get to the end of the program. (That is, if you listen more than once. The first time through I wasn't sure what I was hearing, tell the truth.)

And something has. If you like the nether expanses of outer space in your music, Rhys gives you his version of it here. It is something unto itself--and so not unto somebody else. Begat (or rather beget) yourself a copy and you'll see what I mean. I approve! You probably will too...

And welcome Northern Spy Records to the world. It shows much promise as a label!
Posted by Grego Applegate Edwards at 4:22 AM