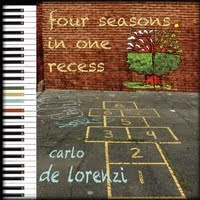 Something can have commercial appeal and still have musical interest. I know that's hardly a shocking thought, but personally I have found myself in musical periods (and this is one of them) when the commercial music-mill increasingly pre-selects what it pushes on factors other than musical merit. I don't mean to sound elite or arrogant about this, but there has been a high percentage of drivel, gruel and pablum coming out of the mill in the last ten years on a whole.

So when something has a bit of a "radio-friendly" cast to it, I sometimes need to force myself to listen and see if there's is more than just "product" at play. In the case of Carlo de Lorenzi's Four Seasons in One Recess (self-released, no cat #) I found my efforts rewarded. Carlo plays piano and keys, writes songs and puts together some nice music tracks.

About half are "real songs" with guest vocalists, the other half are jazz-rock things of an instrumental sort, with room for de Lorenzi's key soloing, which (the soloing, that is) has a melodic flair and a hint of early Jarrettian gospel funk. The supporting cast of musicians vary but generally contribute in the realm of the overall sound more than they wipe one out with devastating solo work. (Jason Sadites's guitar solo on "Change of Pace" is nicely put together in a rock-jazz zone though.) Some of it could be used as music you hear when you are on hold with some company for an hour; others are too good for that treatment.

I found that the melodic qualities of several songs and some of the instrumental writing are on a superior level though. "Ode to Raven" and "Edge of the Rainstorm," with the lead vocals of Steffany Venneri and Jessie Lefebvre, respectively, are especially memorable, nature-centered and hopeful. They are songs to remember and the vocalists have personality.

If other things sound like they might be backing tracks to some unreleased Steely Dan album, I cannot say that they are in any way especially puerile or vapid. If he did a pop-jazz-rock album with more of those songs, and one or two singers in more consistently featured roles, he might get the attention of even more people. I say that only because it is rare to pull off that sort of thing, to come up with songs that could be both popular and substantial. And he does that a couple of times on this album.
Posted by Grego Applegate Edwards at 5:02 AM