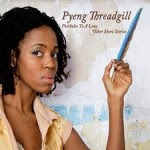 If I have not reviewed vocalist-songsmith Pyeng Threadgill's Portholes to A Love, Other Short Stories (self released, no cat #) until now, it was mainly a logistics situation. I did not have a copy until now. And I am glad I finally do!

I am glad because this, her third solo effort shows her artistry in its most developed state. Her voice is like no other and it is a most compelling instrument. Her songs are in the art realm. This is not pop, r&b, rock or what-have-you. It is art song with the serious demeanor and substance of jazz, with afro-funk-progressive musical clothing. Like a small number of her better-known elders, she takes the music in the air around her and transforms it into her own music. This is music that emerges from an internal conviction that this is what sounds right for her right now, and she bends the conventions of idiom to create a highly personal statement that goes beyond its roots, rather far beyond.

The lyrics tell of a personal journey through life experiences, a journey of growth in a time we all know has been a discouraging one on some levels and encouraging on others.

All this becomes grist to Pyeng Threadgill's mill.

I would hardly say this about some vocalists out there, but with Pyeng it is clear that she doesn't just sing. She has a total musical vision that is fully formed and comes across in her musically rich songwriting and arranging.

Pyeng is one original in a world where cloning is the norm. She is so original that it is not all that easy to describe that complex of "somethings" that make it so.

So I'll just say this: Portholes To A Love must not be missed by anyone who values original music. Categories mean little when the music goes beyond them. Ms. Threadgill does that, in ways that show she is an important voice, a masterful weaver of tale and tone, an artist for our todays and tomorrows.
Posted by Grego Applegate Edwards at 4:39 AM