Pitom: Blasphemy and Other Serious Crimes 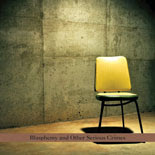 Pitom does Jewish Rock. Their second for Tzadik, Blasphemy and Other Serious Crimes is all about the Day of Atonement (Yom Kippur). It's somber but blazing--in a kind of Masada-Mahavishnu electric intensity mode. They call it "punkassjewjazz." And that captures some of the essence of what they are doing. There IS a kind of insouciancy to it that you could dub punkish. And in that way they are a bellwether of part of the Tzadik ethos--reverently irreverent.

The band is a tight fury of Yoshie Fruchter on skronky fusionoid electric guitar, Jeremy Brown on violin and viola, an excellent addition for his Semitic and otherwise distinctively folkish tone and the sound of his strings blending with guitar on the two-part melody lines. Then there's Shanir Ezra Blumenkranz on hard-nosed bass, and Kevin Zubek doing an expanded rocking thing on the drums.

What appeals to me in this music is the edgyness combined with the Jewish minor mode, the fusion arrangements and the moments of sheer guitar madness (the good kind). Thanks to John Zorn's example and moral support there has been a significant emergence of avant Jewish rock that is both encouraging and exhilarating. Pitom is at the forefront of that and Blasphemy is a terrific example of why that matters.
Posted by Grego Applegate Edwards at 4:35 AM