Muntu Valdo, African Singer-Guitarist, and His Debut, "The One and the Many" 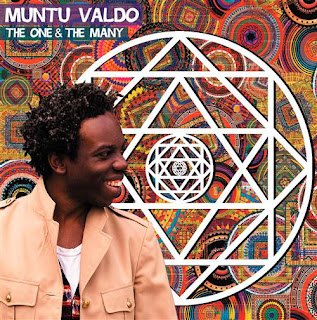 Born and raised in Cameroon, West Africa and residing in London since 2008, singer, guitarist, multi-instrumentalist (bass guitar, percussion, harmonica), Muntu Valdo seems poised for the sort of wider international recognition denied to all but the select few African artists who can appeal to the World Music mainstream. He does for highlife-afrobeat or even traditional singer-instrumentalist music of rural Africa what bossa nova did for samba, what Kebmo did for the blues. He lightens it up, makes it contemporary and a little, dare I say, smoother than the roots music. That is not to say that Valdo is diluting African music or is giving us a smooth jazz version, because that is not what he is doing. All the percussive aspects of the best African music are there, but they come out with a more gentle lilt--again like bossa was for samba. Similarly there are melodic and harmonic sophistications in his vocals and guitar playing that recall how bossa went about things. And too Muntu is more in the realm of contemporary song-folk acoustic style than he is into a heavily electric dance bag. In other words, this is not Afro-funk in some very heavy sense, for the most part.

This is all in reference to his music on the new CD The One and the Many (Warner Jazz 2564674513). It's a many faceted Muntu Valdo we hear on this disk, Muntu the acoustic guitarist and song stylist, Muntu the contemporary builder of harder-edged call and response riff Africanism, even an African equivalent of music with the old R&B shuffle beat.

It's solid instrumentally with some nice guitar work (mostly in the acoustic-electric nylon-stringed realm); it's vocally well developed and hip; and it shows the songwriting/groove producing side well too. Muntu does all parts via overdubbing for a result that is rather impressive. And also rather expressive.

It's the sort of music those who dig African music will dig, but it also has the potential to attract those for whom the world music genre appeals but don't have alot of exposure to musical things African. Muntu Valdo is an artiste. That is something virtually anybody can appreciate. He makes music well worth hearing.
Posted by Grego Applegate Edwards at 4:28 AM