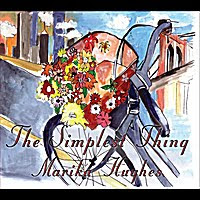 Marika Hughes plays the cello, so well that she also has a solo cello release (which we'll be covering on the Gapplegate Music Review). She also writes and sings songs that have a very personal stamp. The Simplest Thing (DD Records 002) gives you 11 tracks that showcase her art.

She is joined by various acoustic and a few electric instrumentalists. There are country and blues influences. Her voice is in a deeper, almost contralto range and her songs have an indie rock flavor.

I found that she has captured a view, a set of feelings with lyrics-melodies that bring them out well. Her music has an art song substantiality at times, though perhaps not fully realized as yet. Other times there is a kind of pedestrian immediacy that does not go at it in a way that might come off as insincere. She is direct and she is what she is.

I'm glad I listened and look forward to new releases and further growth as time passes.

It is a different sort of disk from an artist with much potential.
Posted by Grego Applegate Edwards at 4:31 AM