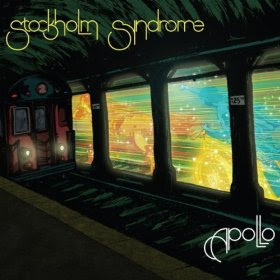 Stockholm Syndrome as a term refers to the love and admiration for captors that sometimes develops in hostages held over time. But it is also the name of a band formed by Widespread Panic's bassist Dave Pools and singer-songwriter Jerry Joseph.

Their second effort, Apollo (Response 4973), has been out a few months, and I have been listening to it. Joseph sounds and writes songs that have a slight resemblance to early Elvis Costello, to my ears anyway. The band is very capable. Guitarist Eric McPhadden lets loose with some nicely fired solos here and there which sound and note with a solid blues-rock thrust.

This is a band that stands or falls on its songs. It stands. The band fleshes out the songs in a way worth paying attention to as well. They make a point to give it all some weight. This does not sound like pop. It is not. I wish them all success.
Posted by Grego Applegate Edwards at 4:17 AM