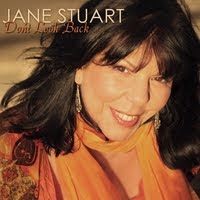 Jane Stuart sounds a little bit like Lena Horn in her delivery. Not in some doppelganger sense. She has a poised vocal demeanor and the sort of alternate phrasings to songs and a smidgen of scat that puts her in the jazz category. Her backing band does the jazz thing too, with a little obligatto, especially from tenorman Frank Elmo. And there's the swinging countenance throughout. I should say that we are talking about her album Don't Look Back (Jane Stuart Music 002).

Song choice is interesting: standards like "I Didn't Know What Time It Was," and "Summertine" (which here in the northern hemisphere seems to be with us BTW, for those who keep indoors in climate controlled, boxy rooms). There are some interesting Jane Stuart originals. And then there are the modern standards like "Eleanor Rigby," "I'll Follow the Sun" and Stevie Wonder's "Bird of Beauty" as well as slightly more obscure things like David Frishberg's ironic, world-weary "Wheelers and Dealers." So it is a good mix.

Those are the basics. I should mention that guitarist Dave Striker does some appropriate accompaniment here and there. Rave Tesar plays some good post-Tyner style piano too.

It's a nice record from a singer that has style. It's a traditional sort of style. You like that, you'll like this. And so sit back and dig the tunes.
Posted by Grego Applegate Edwards at 4:14 AM