Fay Victor and Other Dimensions in Music, "Kaiso Stories" 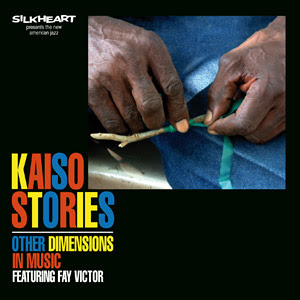 First things first. Kaiso was the precursor to modern Calypso. It came about when African-derived musical-narrative traditions were transposed and transformed on Spanish colonial soil. There was a political component often contained in the song narratives.

With this tradition in mind singer-narrator Fay Victor along with the collective improvisational ensemble "Other Dimensions in Music" has created the most interesting Kaiso Stories (Silkheart 158). She visited her grandmother in Trinidad regularly from kindergarten through her teen years. In remembrance of those experiences and her ancestral roots Ms. Victor narrates, sings, and otherwise deconstructs classic Calypso lyrics overtop a considerably sympathetic avant improvisational backdrop, as played by a formidable group of New-York-City-based artists: Roy Campbell, trumpet, etc., Daniel Carter, saxes, etc., William Parker, acoustic bass, etc., and Charles Downs, drums and percussion.

As I dug this recording I found there were three sorts of levels on which you could appreciate the performances, pretty much simultaneously. The first of course was Ms. Victor's poetic-free way with the lyrics, snatches of melodic phrases (or whole strains, in some cases) based on the Calypso melodies, and her more directly improvisational declamatory free vocalizing-narrating. The second level of appreciation centered for me around the interaction of vocals and ensemble. There are instrumental references to African and Trinidadian melodic and rhythmic phrases as well as free collective soloing of a wider sort. Then the third level is all about when the instrumentalists proceed with their improvisational performances in those sections where Fay lays out.

So we have a kind of three-tiered experience when listening to this one--and each one is valuable in itself.

On a strictly musical level everything comes together. William Parker's bass has an important function of articulating a rooted Africanism, perhaps more so than the others. It's yet another example of Parker's importance on the scene. It is a great pleasure to listen to his interaction with the free-Afro-Calypsian drumming of Charles Downs, who plays an important part in all this as well. Roy Campbell and Daniel Carter sound well and mesh together in a horn web that interlocks behind Ms. Victor when she is in the mix and tends to break out a bit more when she is not.

In the end you have a personal portrait of a person's connection to an ancestral home and all its experiential and political ramifications, and the need to be specific about what that means to her. This is one of the albums that takes a few listens to get used to. If you open your mind you'll find that there is nothing else quite like it. Those who like and follow the NY avant jazz scene will feel intrigued and connected to this. Those who aren't will nonetheless find it absorbing listening, if they remain open as they listen. A fine effort and a very singular one at that!
Posted by Grego Applegate Edwards at 4:57 AM