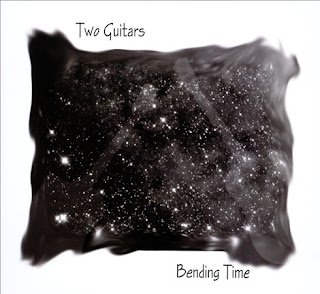 Two Guitars, acoustic, and two fellows playing them with some occasional percussion backing. They also sing on some of the numbers. All this for the EP Bending Time (Two Guitars). Brian Conigliaro and Gus Wieland are the guys playing. They have a tasteful approach. They pick, strum and play some thumb single-note melody-solos too.

There's one original; the rest are covers. And what hit me about those are the very nicely turned arrangments of what are some familiar songs: "Black Magic Woman," "Only Living Boy in New York," Stevie Wonder's "Overjoyed," the Zombies "She's Not There," and last but hardly least a nifty version of the Left Banke-Mike Brown "Walk Away Renee."

This is not going to win a Grammy (and what that means is precisely nothing much) but it is a most pleasant way to spend twenty-five minutes. It isn't jazz so much as a kind of jamming rock-acoustic thing. But hey, I found it a refreshing change to my usual.
Posted by Grego Applegate Edwards at 4:22 AM