Danny Frankel Puts Together A Different Kind of Organ Trio (with Nels Cline and Larry Goldings): "The Interplanetary" 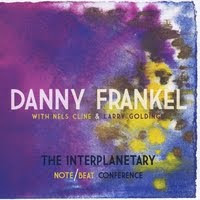 When drummer Danny Frankel teams up with guitarist Nels Cline and organist Larry Goldings, you expect something interesting. In fact The Interplanetary Note/Beat Conference (Self-Released, no catalog #) is that. It is also unexpected. For it is an album of avant space age retro-futuristic secret-agent-in-orbit music. That's the sort of thing that only really works when done well. It is.

All three collaborate on charts that are more than tongue-in-cheek. They explore the domain they set before themselves in ways that allow for some improvisatory interjections that are musically singular and songs/arrangements that build upon the premises in ways that make for music that is not only about music of an earlier era. It is music that is about itself as well.

Nels Clines' guitar, whether electric, acoustic or one of those electric sitar guitars, is smart, creative and a wide stride ahead of a merely ironic stance. The same can be said about Goldings' organ work and Mr. Frankel himself at the drums and bongos.

It is music that is a hoot, yet it is substantial, like some things that John Zorn has done or even some of Sun Ra's Afro-space fox trots from his peak years.

It's quite good. And quite fun too!
Posted by Grego Applegate Edwards at 4:53 AM