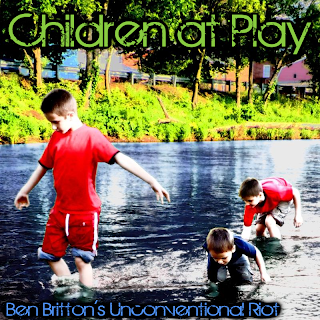 Ben Britton and his group Unconventional Riot do something nice on a download-only EP Children at Play (self-released). Ben and his trumpet-playing brother John did a previous album under the nom de plum the Britton Brothers. I haven't heard that one, but Children at Play brings John in for one of the three cuts.

It's contemporary jazz with the kind of modern rhythmic and overall thrust of a small Dave Holland group. Jordan Berger's contrabass and Gabe Globus-Hoenich's drums lock into straight-eight grooves (one goes a rock-cum-low-amplification route). Ben on tenor, Matt Davis on electric guitar and for one cut John on trumpet get good leverage and interesting melodic-harmonic depth as a front line, with Matt comping chords with subtle openness. All three front liners have good solo moments and the compositions have weight.

You can grab this goodie at i-tunes or Amazon at a nice price. It's no doubt just a taste of things to come, but it gets a thoroughgoing froth of good sounds going throughout. Check it out.
Posted by Grego Applegate Edwards at 4:25 AM