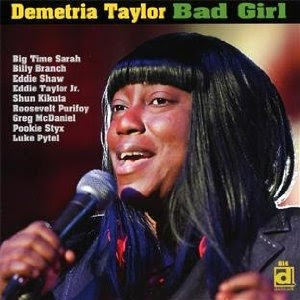 Demetria Taylor sings the blues. She SINGS the blues. Ever since Ma, Bessie and Minnie, women have made it clear that the blues is no exclusively male domain. That's no less true in the urban, electrified blues world today than it was when the early masters recorded, Bessie in a tent on one session, since her voice was so powerful the cutting needle was jumping off its track. If anybody would make that needle jump again, its Demetria Taylor. She has one huge and imperative delivery. She belts them out, Jack. She's the daughter of Chicago blues guitar legend Eddie Taylor, and you hear how she must have imbibed the blues tradition starting at a young age.

Bad Girl (Delmark 814), her recorded debut, dispenses with the tent because today of course we can get the levels right without recourse to such extremes. Tent or no, Demetria lets it all loose in a program of blues classics and classic blues that electrify as they electri-testify. It's Demetria and a hot band of urban bluesmen. The guitars of Shun Kikuta and Eddie Taylor, Jr come out of the background and power up some firestorming bends and tatoos to match Demetria's passionate soulfulness.

Listen to the growling despair of "Cherry Red Wine" and you know that nothing has been watered down for the feint of heart. There are hot versions of "Wang Dang Doodle," "I'm A Woman/Hootchie Cootchie Woman," "Big Boss Man," and "Wang Dang Doodle" and "Little Red Rooster," and it all hits home. Demetria HAS it in all the ways the classic Chicago blues greats had it. Bad Girl gives you the goods. You think there's nothing happening in the blues today? Think again. Demetria Taylor is one of those happening things. So get with her music.
Posted by Grego Applegate Edwards at 4:41 AM