Quintus McCormick's Soul-Blues? Oui! "Put it On Me!" 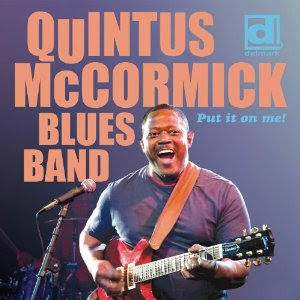 If you are into the soul blues tradition of legends like Bobby "Blue" Bland and Little Milton, then you will appreciate Quinton McCormick's Blues Band. Their second album, Put it On Me (Delmark DE 815) gives you the band at their best, 14 slabs of sanctified carrying on. Quintus wrote the songs, sings and plays the guitar solos and it all works. For about half the numbers the band is joined by the Chicago Horns. You get a good slathering of the old-school renewed for today.

It's the real deal. Quintus was born and raised in Detroit, began playing the guitar at age eight, came over to Chicago to study with Tyrone Davis's arranger, James Mack, and started up a band there. The Quintus McCormick you hear today is a fully formed bluesman with an original vocal style and some very soulful lead playing.

Get it happening with this one!
Posted by Grego Applegate Edwards at 4:37 AM