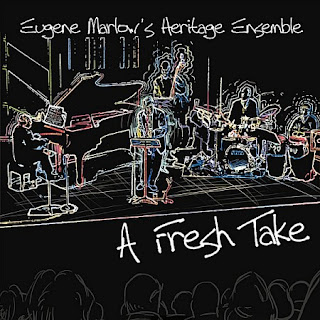 Dr. Eugene Marlow, pianist, arranger and founder of his Heritage Ensemble has had an idea and has made it work. The idea: take some cornerstone Jewish folk songs and liturgical melodies and rethink them for a crack ensemble in a style that has much of the Latin tinge as well as Brazilian, hard bop and post-bop jazz sensibilities. His new one is a remake of Making the Music Our Own, which the ensemble released in 2006. This time out it is dubbed A Fresh Take (MEII).

I have not heard the original, so my comments will not touch on that part of the music. In many ways what counts is the new one. First of all the band: there is Latin percussionist/congalero Cristian Rivera, who blazes away in fine fashion. Frank Wagner walks and talks on acoustic bass with eloquence and hard swing. The beautiful and well-appreciate Bobby Sanabria is on drums, and he makes the session pop as he does with his own bands and just about any time he is in the mix. Michael Hashim combines Judeo minor strains with a hard-charging modern sound on soprano and alto. Eugene Marlow has some expansive opportunities to solo and he transposes the Semitic tonality into jazz phrasings--a freely voiced bop and beyond pianism that forms a high point to the disk.

Combine all that with very interesting arrangements and good grooves and you have the album in a nutshell. The Heritage Ensemble is doing something that no one else is doing in quite this way. And they do it very well. Needless to say the diaspora, as we saw in the last posting, can become a center, musically speaking. It does here. I certainly recommend this one.
Posted by Grego Applegate Edwards at 5:04 AM