Troy Roberts and his Album "Nu-Jive": Funk with Brains 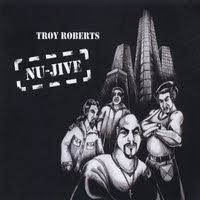 Tenor saxist Troy Roberts has given us with Nu-Jive (XenDen) an album of post-Hancockian funk that is not slick, not puerile, has a lot of good blowing and tunes that kick it up in varied ways.

The band is together. It's Troy on tenor, Silvano Monasterios on keys, mostly electric piano, Eric England on electric bass and David Chiverton on the drums.

Troy is Australian. He blows a lot of tenor in the wake of somebody like the late Michael Brecker. He does not hang back and the approach of the band is to do the funk in ways that leave no doubt this is JAZZ-funk. In that way they are like the Brecker Brothers at their best, and of course, Herbie H. when he wants to do that.

It's pretty impressive stuff. Troy is a PLAYER.
Posted by Grego Applegate Edwards at 6:26 AM