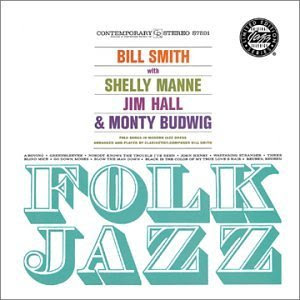 There are recordings that fall through the cracks. Then you find out about them eventually. That is the case for me and clarinetist-composer Bill Smith. His Folk Jazz (Contemporary-Jazz Classics) recording from 1959 was literally off my radar. I don't think I ever even saw it in my many bricks-and-mortar adventures.

Then a little while ago in the course of interviewing bassist Michael Bisio he mentioned his association with Bill Smith in his Northwest Coast days, then mentioned Folk Jazz with high praise (the interview is online at All About Jazz). I did not need to be told twice. It may be OOP but there are copies around on the net if you look.

It survives as a reissue of the Contemporary LP in the form of a Jazz Classics CD--and since Concord took over the label(s) appears to no longer be in manufacture. Now of course Contemporary was so prolific it would have been easy to miss. I did.

Bill Smith, to backtrack, first came to notice as one of the members of Dave Brubeck's experimental Octet in the beginning of the careers of both. Smith was a fellow colleague in the Mills College Milhaud days and participated in a number of Brubeck's first recordings, then went his own way. He has garnered a reputation for his deceptively cool clarinet and his compositions. Folk Jazz if I am not mistaken was a one-off project that did not have a sequel.

You have Bill on clarinet, Jim Hall, guitar, Monty Budwig on bass and Shelly Manne on drums. It's on the surface a typical West Coast session with a typical line up. But the music! Bill takes eleven well known folk melodies and proceeds to burn them up! With a cool fire. . . . There is some relation to Jimmy Giuffre's work of the time, which is helped by the presence of Jim Hall who had an important association with Jimmy, and both the clarinet work and treatment of themes invite comparison.

However, Bill Smith is his own person on clarinet and sounds wonderful here. The group is more overtly concerned with swinging than the Giuffre Trio of the time and the presence of Budwig and Manne changes the tenor dramatically. Hall is doing his very hip, very subtle best and the rhythm team is taking no prisoners, though their mission does not include such things anyway. Smith and Hall work together like hip clockwork throughout.

It's a killer, folks. A diamond and not in the rough, just hidden from the public ear for too long. Grab a copy while you can still find it and I think you'll be very happy you did.
Posted by Grego Applegate Edwards at 5:03 AM