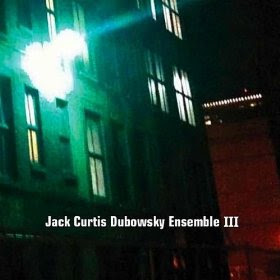 I reviewed the second Jack Curtis Dubowsky Ensemble album on these pages some time ago. At that point his way of proceeding was a bit locked into itself. Essentially Jack would lay down a particular electric bass ostinato, the drummer accompanied with a rock beat, and one or more synthesizers played back the cyclical drones and repeating electronic pulsations-sound melodics for which they had been programmed. It was a pretty simple way of going about things. But on several listens one came away with the idea that there was something appealing about these hypnotic series of sounds. The results often enough were intriguing, though not requiring a great deal of musical technique. It was a kind of elemental sound environment he created that, when it worked, did so with a nonconformity that I at least found valid.

Jack Curtis Dubowsky III (De Stijl Music) moves the music forward a bit. There are pieces that follow the same general trajectory as the second album, and for those one can more or less repeat the experience one gets from the earlier collecton. Fred Morgan is laying down the beats in a steady way. Jack adds piano and percussion to his instrumental arsenal. There are pieces that break away from the pulse, riff, beat patterns and they have an atmospheric charm much of the time, but I must say they also do not have the same hypnotic quality. By going into more improvisational territory the ensemble invites comparison to the many other groups working that style. And one must say that there are others who have managed a more inventive, more free-virtuosity than is the case here.

The non-beat pieces are a change of pace from the beat-oriented pieces, so there is something to be said for their introduction. They do not completely hold their own however. On the other hand the very last cut, "Sleep", has something going for it with Jack's vocals, John Fletcher's lyrics and the general pulsating ambiance. This is not something you'd ever hear on pop radio. It is not uninteresting in a spacey way.

All in all, then, though there is an evolving stylistic set of approaches to be heard on this one, it is less successful and, for those non-trance-beat pieces, a bit more exposed and less inventive than perhaps it could be.
Posted by Grego Applegate Edwards at 5:04 AM