F*cked Up and their Punk Opus "David Comes to Life" 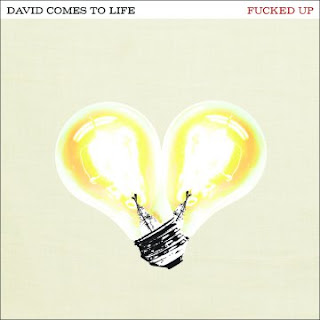 How do you judge punk? With your gut. It has to hit it. There should be fire, attitude and primal scream. There should be energy. There should be some feeling coming out of the usually elemental chord progressions. They should all be together. . . or not, in interesting ways. The lyrics should express something, supposing you take time to listen to them and/or they are audible. Other things too. Hey I just woke up, so the other things are at the bottom of my coffee mug.

F*cked Up, a band from Toronto, have all that on their recent David Comes to Life (Matador). They are a sort of band that might get some melody and guitar work in there that isn't strictly punk. And to me that makes them interesting. Oh, this album is based on a play. That's what Matador Records' website says. And if you listen hard, it sounds like there's a story there.

This is wall-of-sound stuff. My wife hates them. She doesn't like punk, though. They have power. It has a hard, near-metal largeness to the thrash. They combine punk with '60s folk rock via a 12-string jangle on one--and that's different. The band name wakes you up, doesn't it? It tells you that they don't want to enter the mainstream pop world. You have to admit that's pretty cool.
Posted by Grego Applegate Edwards at 4:07 AM