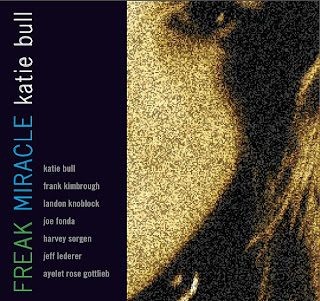 There are vocalists and then there are vocalists. Katie Bull is in the latter category. I of course wax humorously (I hope) cryptic. What's the case with Katie Bull is she is the sort of jazz vocalist who uses herself as an instrument. I've been listening to her Freak Miracle (Innova 802) CD, out earlier when something called summer was with us in our hearts. I listen and increasingly think that my listening time has been well rewarded. Katie has surrounded herself with good jazz musicians like Frank Kimbrough, Jeff Lederer, Joe Fonda, and she brings them in in various combinations according to the needs of a particular song. There's a mix of standards and Ms. Bull's originals, which are quite interesting.

The stars of the show are Katie Bull's voice and her intelligent concept of a modern jazz. This is music with freedom and with a stretch of the vocalist-with-improvisers tradition. There's effective accompaniment, Lederer sometimes playing Prez to her Lady Day, for example. I don't mean that either sound like the latter-either. I think of that classic give-and-take you get on the best of Billie's collaborations with Lester. There's something of that here.

Katie Bull has a voice that carefully enunciates the lyrics (Carmen McRae used to do that especially well) and there is plenty of nuance and improvisational variation going on too. Her voice is attractively breathy or ringingly downright as she feels the music. And she hits notes and phrases with the confidence and imagination of what a jazz musician is supposed to be about.

Katie Bull is a fine one to kick off the autumn season on these pages. She's good. The music flows consistently and attractively from her throat and the various appendages/sounding-methods of her fellow musicians. If you want a modern-day vocal disk that puts a fresh face on the genre, Freak Miracle will give you that. Ms. Bull is not shooting a bunch of bull (good thing, too). She is a real talent.
Posted by Grego Applegate Edwards at 4:53 AM