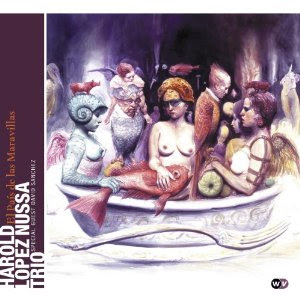 The melding of Afro-Cuban music and jazz has been going on since the rise of son and the "Spanish tinge" of Jelly Roll Morton began a slow but steady convergence from early mid-20th century practices through to today. If Latin jazz will no longer get the Grammy coverage it has had in the past, it is not of importance, ultimately. It is true in varying degrees for all music, but Latin jazz in particular is not a music that gains much from official recognition, save a career boost to (and better prospects for the survival of) the artists involved. Latin jazz is a music of the barrios, the streets, the clubs, a ground-swell music of personal involvement, not so much of racking up high chart numbers, though again that is a nice plus for the music when it happens.

We have seen in the altered attitude on the part of world leaders more accessible inroads to current Cuban resident Latin jazz and Afro-Cuban artists, exemplified in the international rise to prominence of pianist Gonzalo Rubalcaba over the past 30 years.

Happily another good pianist is emerging into the spotlight outside of Cuba--pianist Harold Lopez Nussa. His trio (with saxophonist David Sanchez guesting) has a CD out, El Pais de las Maravillas (World Village), and it's a good way into Sr. Nussa's music. On this album Nussa often works closely around and within the Latin rhythmic tradition for both his comping and as implicit or explicit in his soloing. The jazz element takes everything post-bebop as its foundation, from Latin hardbop to Corea-and-beyond fusion. It's a music of stop and go fusionic kicks, steady-state Latin grooves and good solo performances from Nussa and Sanchez.

The rhythm section never flags. They set up the all important clave, post-clave and implied clave that the melodists work off of with success. There are enough contrasts and varied approaches in the 11 cuts that generalizations may not fit absolutely everything. Suffice to say that there is plenty of space for Harold Lopez Nussa to exhibit his gifts as improviser, harmonist, vital rhythmic catalyst, and tune-meister.

An excellent addition to this year's batch of Latin jazz offerings. I suspect we'll be hearing a great deal more from the pianist. Happily.

Posted by Grego Applegate Edwards at 5:02 AM