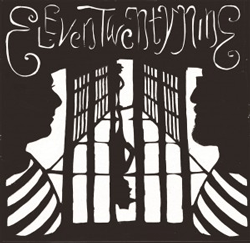 I won't say I am getting blase about music. That will never happen. But when you get stacks of CDs every week for review consideration, and many of them sound a little bit similar, you can find that at first listen nothing sticks in your head. They sometimes all run together until you listen for the second or third time. That was not the case with Eleven Twenty-Nine (Northern-Spy), a series of guitar duets by Tom Carter and Marc Orleans. From the moment it sounded from my speakers, I knew that this was a rather rare commodity.

The music is largely electric. There are quasi-trancey raga-rock sequences, there are bluesy excursions, there are expositions that have a minimalist post-Fripp-Eno ambiance. And all of it has the distinctive stamp of the guitarists' vision on it.

Both artists have a track record behind them. But all that doesn't have direct relevance to the plain fact: this is creative music, it takes you someplace without leaving you stranded there, and it glows with a kind of caring love of the sound of guitars and what's been done or undone with them since Hendrix, Duane Eddy, Gary Lucas, John Fahey and Robert Fripp plugged in (or didn't) and shaped a sound. Tom Carter and Marc Orleans are shaping their own sound. You can be there by plugging in your music system and putting this on.
Posted by Grego Applegate Edwards at 6:09 AM